Light is primeval source of energy

Nowadays it is very important for our health to be able to take advantage of lighting systems equipped with specific intenseness and shades and with an emission of a peculiar quantity of light. Indeed an adequate lighting system in houses, in offices, in aggregation places and in nursing places helps people to live better. International studies and researches assert that man spends most of his time in closed ambients with an inadequate quantity of light. In many people this insufficiency can cause depression, anxiety and weariness and it can also weaken the immune system.

Moreover it has been noticed that these diseases increase in autumn and winter, when the weather is often cloudy, rainy or foggy and the hours of light are reduced. NPS aims to create a range of lighting systems which can represent an effective support for human Wellness and health.

Light, primeval source of energy, thanks to its refraction, gives us the spectrum of the primary colours, the rainbow colours.

The idea that colour positively influences physical and psychic Wellness dates back to the origin of natural medicine.

During the prechristian age, ancient cultures in Egypt, Tibet, China and India already knew the therapeutic use of colours. Later, in his De Medicina Aulus Cornelius Celsus, a Roman physician of I century, talks about some poultices coloured of red to heal wounds. In XI century, Avicenna, renowned doctor from Baghdad, gave a lot of importance to the colour, useful both for the diagnosis and the treatment.

In Europe, during the Middle Age, colour had significant value in the official medicine at the English and French courts; for example in 1300 Edward II, King of England, was told to stay in a red room to fight smallpox. During the Modern Age, in 1666, Isaac Newton proved the existence of the chromatic spectrum made up of the 7 fundamental colours (those of the rainbow: red, orange, yellow, green, blue, indigo, violet).

In the last century, scientists highlighted the fact that colours are light energy which can be quantified and measured in wavelength (angstrom) and frequency (hertz).

In this way the frequency of each colour, just as that of crystals or flowers, can interact with the electromagnetic fields of human body (but also of animals and plants), causing an energy re-balancing.

The main studies with the Therapy of Light have been done with an illuminance of 2.500 – 3.000 lux at the eye level.

Following tests have pointed out that the therapeutical effect does not change by exceeding 10.000 lux (it is helpful to remember that in a sunny day it is possible to survey an illuminance between 50.000 and 100.000 lux).

Striking the eyes, light comes to the retina where it is converted in electrical impulses by millions of cells named photoreceptors.

These impulses go along the optic nerve and arrive to the brain where they stimulate the hypothalamus. 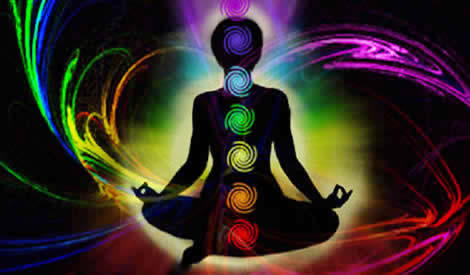 The hypothalamus sends its chemical messengers, the neurotransmitters, to regulate the autonomous functions of the organism. Each organ has its own vibration.

When one of them is exposed to a colour irradiation it is possible to remark an absorption of electromagnetic waves, with a different oscillating frequency according to the colour.

Besides cells, consisting of atoms, resonates with the frequencies of light waves and recover their balance.

In particular some studies show important connections between light waves and ductless glands. Some researchers assert that the best way to take advantage of colours is to sunbathe without the hindrance of clothes (if possible).

In fact the sun has the whole spectrum of colours and in this way our body can absorb the colours it needs and reject the rest. Maybe it is also for this reason that our mood gets better during the summer.

How the Diffuser acts 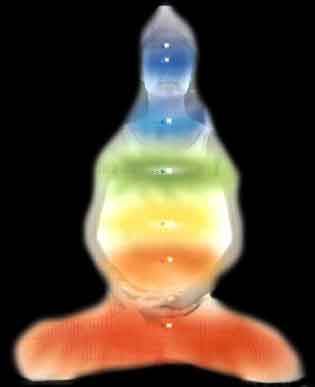 Therefore chromotherapy is a therapeutic technique which employs different colours in order to make vibrations", pass through the body producing biochemical variations in the cells and in the blood.

What marks chromotherapy is that for this method disease is an alteration of the specific vibration typical of substance.

Human body is an energy and electromagnetical whole where the different parts vibrate in total harmony, even though they preserve their energy specific identities and vibrations.

Colours are sensory experiences, which interact with the experiences caused by the other senses and create chain sensations, also renowned as sinestesis.

For example looking at an acid yellow we stimulate the taste which reminds us the sour and pungent flavor of lemon or we stimulate the olfaction with its fresh fragrance. Intense light (> 3000 lux) influences human circadian system.

It is important how the power of the light which touches the retina is intense, even if there is an indirect irradiation.

Light density directly measured in the eye (candle/m2=cd/m2), can be a better unit of measurement to compare clinical studies.

The unit of measurement universally utilised in literature is the lux. Light has also a therapeutical effect on seasonal affective disorders (SAD).

Light exposure has to last at least half an hour every day for a week. Another helpful use of light is in case of interrupted surveillance, such as senility; addiction, delirium.

In case of night shift, intense light improves surveillance and helps the adaptation of the circadian system.

But action mechanism of the light therapy has not been totally disclosed yet.

Probably melatonin acts as mediator but at the moment there are not definite criterions for the medical employment of this hormone or of its antagonists.

Scientists are discovering we are beings of Light, of an energy which vibrates at different levels. Each vibrational level is combined to a colour of the rainbow. 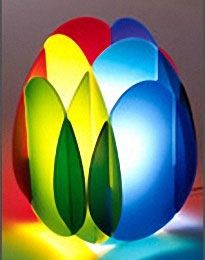 All the substance is nothing more than colour which vibrates at different frequencies! We are alive because a vital force flows through us. This force is regulated by the centres of energy,also named chakras.

We react unconsciously too to colours, because sight is mainly an unconscious stimulation of colour vibrations.

Chromotherapy is an alternative medicine which employs colours to aid human mind and body to find their natural balance.

Colours can be absorbed in different ways: by food, by bath, by meditation, by visualization.

In particular chromotherapy with electromagnetical waves is the utilisation of coloured light, which, within a precise wavelength, seeps in tissues and interacts with cells to re-establish the electric and chemical balance of the cellular homeostasis, improving its biological functions.

Blue is thought to be an Excelent natural sedative and an effective remedy for insomnia.

For this reason blue is often recommended for bedroom walls.

A blue room stimulates the slowdown of breathing and of heartbeats which gives rise to deep loosening, peacefulness and a better concentration.

The vibration which each colour provokes in an organism makes the re-balancing of altered psycho-physical conditions possible (this alteration can be caused both by bad behaviour in everyday life, such as improper food, smoke, alcohol, sedentary life; and by external factors, such as accidents, negative emotions, sorrows).

In this way the natural process of self-recovery is stimulated. Indeed this is the aim of chromotherapy and of other natural therapies: to stimulate the organism to the supplementary reaction, and therefore not to the curative ones.

In the light of these mechanisms just resumed, Music therapy series have been studied, tested and created to give separately and holistically the best efficiency for the programs among which the user can choose.