Aromatherapy is one of the technique of natural, alternative, holistic medicine

Aromatherapy is the treatment of illness through the use of the essential oils extracted from aromatic plants; and it is one of the technique of natural, alternative,holistic medicine.

Till the dawning of human historyà, Nature Èhas always been a remedy for man, and in particular the plant, mother of almost magic substances for a culinary, medical and even religious use, still goes on to charm. Human passion for herbs dates back straight away to the Paleolith.

The utilisation of the aromatherapy was already known and appreciated 5.000 years ago in China, Tibet, India and Egypt.

The oils were used not only for their therapeutical property, but they also had a significant task both in the holy and profane domain.

They also were utilised by Priests to heal ill people and to worship gods during religious ceremonies. In Egypt, in Heliopolis, a mix of 16 herbs, including incense, myrrh, mint and cumin, gives rise to the famed Kiphi, a compound which was burnt at sunset in honour of Ra, the god of Sun, to prey him to let the sun rise the following day. Later, essential oils were also employed in cosmetics and medicine(in particular to heal wounds) even by Greeks and Romans.

Oils also played an important role from the Middle Age to the XIX century to prevent epidemics. In 1928 Gattefossécoins the word aromatherapy, which takes a more prevailing role thanks toJean Valnet's studies. In the Sixties, the work of this doctor promoted the reborn of the scientific interest in pharmacological powers of aromatherapy, which is taught in some French universities today. 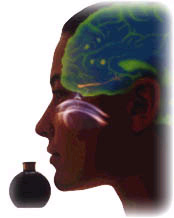 The aromatherapy is both preventive and curative; and it , e heals, that is, it re-balance the alteration conditions.

The essential oil is obtained by the steam distillation of an aromatic plant; this process also gives origin to another product: the floral water. The essential oil which pour out from the alembic is a natural oil. In aromatherapy we always refer to essential oils which are totally natural and pure, and not synthetic or blended. These oils come from selvatic plants or from biological farming, but it is also possible to use the active principles of various plants (=phytotherapy).

Thanks to the relaxing and antispasmodic powers, essential oils gain a predominant part in healing many psychosomatic and psychological diseases. The aromatherapy is a medical treatment with flavors, volatile principles drawn out from medicinal plants. Among our five senses, olfaction is the most deeply linked to emotions and memory, as the extraordinary evocative power of smells can show.

When the brain is stimulated by a flavor, nerve endings in the nose send a message to the system which regulates memory and emotions, and then to the hypothalamus, which rules the hormonal system. Some essences produces a considerable effect on the emotional and psychic balance, able to soothe anxiety, sadness and stress.

12 essential oils, guaranteed pure and wholesome, have been chosen to warrant the effect of the four expected programs, as well as a further issued flavor, in order to offer to our customers specific flavors which can therefore be created following their demands!

Lately, the new concept of "Aromachology" is spreading, next to the classic definition of "Aromatherapy".

The Aromachology (flavor added to physio-psychology) studies the ability of scent to improve both physical and mental Wellness.
This science studies flavor effects on our feelings and our psyche , besides seeking flavors and the best combinations to increase our feeling of wellbeing through smell. 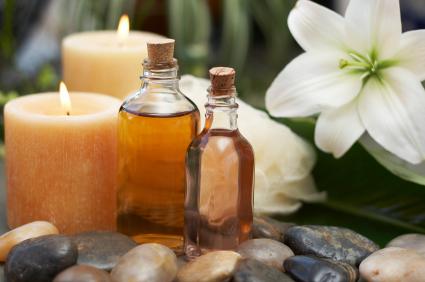 It is therefore an evolution which involves disciplines linked to olfaction (for example the forming of receptors and their specificness, it has been shown thanks to the authoritative studies of Richard Axel and Linda Buck, Nobel winners in 2004), to neuronal connections from and to the hypothalamus, till the olfactory evocation on automative ways in memory and unconscious.

For this reason, many fields of science are involved (medicine, neurology, psychology, physiology, biochemistry, endocrinology, naturopathy) and in this way different disciplines develop interdisciplinary connections, organizing themselves as a "research system" to cross new frontiers of science...

Relaxing and antidepressant essences are rosewood, ylang ylang, rose. In the living room, the essences which bring relax and comfort are spices and woods.

People who look for serenity and calmness should prefer lavender and sandal. You can use antiviral and immuno-stimulating essences ( juniper, thymus) for preventing infective diseases. 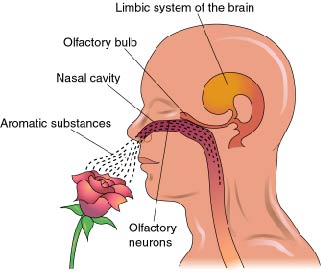 Sedative essences which aid the sleep of nervous children and of under-stress grown-ups are orange flours; ylang ylang ecc...). For a good sleep, you could use the lavender essential oil.

The essential oils which compose this scent are used in aromatherapy to re-balance the stress symptoms such as insomnia, anxiety and hyper-sensitiveness.

For example the vetyver is called "the oil of quiet" and the neroli is used for babies and children who have difficulties to sleep. Its celestial and light scent reminds us the blue sky.

The lavender is a good solution for people who suffer insomnia, headache and vertigos.

In this perfume, the dominant essence is mandarin, with its typically fruited flavor. It has a relaxing effect, giving optimism and energy to people who can be afraid and sad, while it soothes the bad temper of severe and irritable people. Mandarin is also loved by children.

That is because it is perfectly connected to childhood feelings. In fact, if a human family was compared to the citrus family, dad would be a grapefruit, with its bitter and strong taste; mum would be a sweet and reassuring orange; the teenager would be a lemon, extreme and revolutionary; while the child would certainly be a mandarin, with its sweet and soft taste. As a matter of fact, in aromatherapy mandarin is often used alone to heal nervous disease during the childhood.

FLAVOR ESSENCE FOR MEDITATION AND VIGOUR

Essences chosen for meditation have been purposely studied to help reflection. Therefore these flavors touched man at the deepest level, bringing peace and joy to his soul. In the ayurvedic philosophy, meditation is one of the three components for a wholesome life, together with a balanced diet and yoga exercises.

If you are not very expert, you can make the therapy more effective by learning the basis techniques of Kriya Yoga science to focus your mind and reach higher degrees of consciousness. Instead if you already practice meditation, you quickly understand the benefits of our aromatic series (which are also linked to other therapies).

Meditation made according to our psychophysic needs can therefore be a valid support to overcome everyday problems.

Nevertheless, you can obtain rapid and effective benefits without your commitment: you must fit a new concept of life.

This holistic therapy is particularly suitable for an application during the sunset, even if it can be made every time you need.

Energizing essences mostly have a floral and/or citrus origin. This kind of essences do not act as medicines, whose molecular structures are united to particular receptors of body cells; on the contrary these oils influence the fine energetic structures which give vital energy to mind and body. In fact floral and citrus oils modify the energy stream through meridians, chakras and thin bodies, acting on energetic structures which, in their turns, operate on conscience.

This holistic therapy is particularly recommended for the awakening, but it can be applied every time you need an energetic impulse (for example, before a physical or a intellective work).

The Wellness Diffuser can be therefore considered as an innovative flavors Diffuser, one of the most effective machineries, equipments or devices for aromatherapy, in order to aid specific programs for in aromatherapy to stimulate meditation, relax, sleep and psycho-physical energy.